Smartwatches, smart wristbands, fitness trackers, helmet-worn impact checkers, back pain posture checkers, necklaces, clip-ons, smart clothing and other wearable technology already exist and may be an important part in the future of healthcare.

These gadgets can record various vitals and electronically send them to your doctor on your next visit, or via apps on your smartphone. When data collection becomes that easy, anonymize aggregated data from cities, states or even countries can be analyzed as a whole, to detect trends in the general populace.

Wearable Health Tech: By the Numbers

Smart wearables include glasses such as Google Glass. However, we’re looking at wearable tech that can monitor various body metrics. E.g., select smart watches, health and fitness trackers that may include smartbands, clip-ons, pendants on necklaces, bandage-like temporary wearable tech and even smart clothing and other items.

Google CEO Larry Page spoke at a TED conference in Vancouver in Mar 2014, saying that open medical records (that is, shared) will result 100K lives saved yearly. Data would be anonymized first, but if research doctors had access to the data, lives would be saved.

The number of smartwatches and related devices on the market will increase from about 15M in 2014 to 373M by 2020.

170M health and fitness wearables are expected to be in the global market by 2017.

Fitness wearables collect data and typically sync with a smartphone at the user’s choice, though some can sync automatically. Smart wearables also typically have GPS and can use location and distance over time to calculate various metrics including, but not limited to, the following:

The downsides to some current devices include the inability to be accurate pedometers (i.e., accurately measure footsteps), as they sometimes track hand motion that may not be in sync with walking.

The Fitbit Force has been a relatively popular bit of wearable tech that was recalled.

The Fitbit Force wearable is officially off the market as of mid-Mar 2014, due to complaints of skin irritation and blistering.
$50M in venture capital was raised by Fitbit.

9.9K complaints of skin irritation and 250 of “blistering” were reported to the CPSC (Consumer Product Safety Commission).

Fitbit actually reported a higher figure of 1.7%% of users experiencing problems, possibly due to nickel in part of the device that touches skin. (Nickel is a common allergen found in watch backplates and some jewelry.)

One theory for the skin irritations reported is that since the company encourages wearing the Fitbit through the day, users are finding that sweat, soap and moisturizers are being trapped under the smartband, causing “contact dermatitis.”

Another theory is mass psychogenic illness, whereby people hear about other people getting sick due to something and also get sick because they think they’ve been exposed to the same germs or toxins.

What Apple Is Up To

Apple is not yet in the wearables market, at the time of writing, though online rumors are flying that some time in 2014, they will reveal a durable curved glass “iWatch” smartband with some in-built sensors. The glass, called Willow Glass and made by Corning, is thin and flexible — the product of over 10 years of development.

The iWatch sensors are further rumored to be able to to measure blood pressure, hydration, heart rate and more.

Bloomberg.com had said in Feb 2013, as many as 100 product designers were working on this Apple device.

TheWeek.com quotes analyst Katy Huberty saying also in Feb 2013 that Apple’s involvement in the wearables market could be worth $10-15B annually for them alone.

Apple has been filing multiple patents for HUDs (Heads Up Displays) that stream data to the human retina — possibly for a device similar to the Google Glass which might work in tandem with the rumored iWatch.

For example, the Nike+ app runs even on the iPod Nano (complete with pedometer), and wirelessly connects to Nike FuelBand smart band (which  — which measures calories burned, steps, distance, pace and more. The app can also wirelessly connect to heart-rate monitors.

Apple CEO Tim Cook wears a Nike FuelBand and sits on that company’s board of directors.

Apple is also said to be gearing up for mobile healthcare and fitness in the form of an app, codenamed Healthbook, said to be scheduled for release with the iOS 8 mobile OS in late 2014. Healthbook will supposedly be able to perform fitness tracking (distance walked, calories burned) as well as certain vital signs (blood pressure, heart rate, glucose levels and more), and track medication being taken. This would suggest the possibility of a wearable monitoring device that would sync with the Healthbook app. Whether it will be the rumored iWatch or something produced by a partner company is to be seen.

The company has also been hiring various experts from the sensor, fitness and medical industries. One is is Michael O’Reilly, former EVP and CMO for Masimo — though reports say he is not exclusively working on the iWatch. (Masimo produced a finger-based pulse monitor that connected to the iPhone.)
All these are indicators that Apple is likely working on something related to health and fitness, though until they reveal or confirm actual hardware, much of this is speculation.

What Google Is Up To

Google has put a lot of resources and money into developing and promoting their Google Glass wearable tech. An anonymous Google exec told the NY Times in Feb 2013 that the company hopes that Google Glass will make up 3% of revenue by 2015. (Which is a lot to expect for a product that, in early 2014, is still only available to developers, at a cost of $1500.)

However, Google Glass currently has no evident application in health and fitness and tracking, and the company knows this will be a big market. Given what Apple appears to be up to, Google is not going to step aside and let them have all the fun. In fact, Google wants to be the mobile OS of choice for smart wearable gear. They’re releasing an “Android Wear” SDK (Software Development Kit) later in 2014.

The Benefits of Mass Acceptance of Wearable Health Tech

There are a number of benefits that can be gleaned if wearable health tech is widely accepted:

People in remote areas without access to doctors could be assessed remotely with collected data, assuming they have at least cellular Internet access and a suitable mobile device to send their measured data.

Research doctors can more easily collect and analyze large quantities of data. This allows for analysis of health data that represents a wider population and which can reveal trends that might otherwise go unnoticed. E.g., that a certain region is suffering from weight gain more than others.

While it is possible to collect much of the same information without wearables, it’s a lot more effort. There’s also the issue of whether different HMO policies allow them to share the data or not. When the data belongs to the patients, collectively, that issue potentially goes away.

Open health data will be a boon for doctors and scientists who want to study health-related habits en masse. In fact, anyone who is interested could analyze the data, and possibly bring a different perspective to trends.

Data can be anonymized but with pertinent profile details such as age and sex (if available), weight and location kept in tact, to provide valuable demographic and regional information.

A few use cases for wearable health tech include:
Monitoring weight gain as a populace, and what fitness activity we’re taking to fight obesity. (Note: the weight information would be manually entered by each user into their profile for each activity session.)

The fact is, there are smartphone cases and plugin devices that can collect much of the same info as health and fitness trackers and monitors, sometimes more data. However, wearable tech is more convenient than a smartphone to carry around for some activities such as swimming or surfing.

In fact, some wearable tech such as the Shine pebble-shaped device from MisfitWearables.com is waterproof (to 50 meters/ 164 feet). Battery life for the Shine is 4-6 months, depending on usage, and it’s easy to wear in different ways with accessories such as a clasp, watch (sport and leather) bands, and as a necklace. A similar device to Shine, from Fitbug.com is the Orb, which can also be worn in a variety of ways, including as a necklace.
Try that with a smartphone, which is typically more expensive than most wearable health tech. The Shine is about US$120, the Orb US$50. Which would you be more willing to lose: smartphone or wearable tech?

To help the proliferation of wearable tech for health use, some have suggested that doctors actually prescribe the use of such tech. It could be as simple as the type that gets affixed temporarily in a sticky bandage-like form factor, or something more durable and long-term. Prescription of wearable tech might just be a doctor’s dream if it gets patients to be more active. 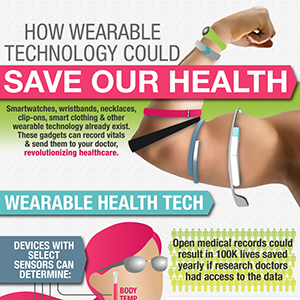